Skip to content
My phone chirped, and the screen said New Text Message from Elizabeth SV Luna. I slid the screen open with my thumb and looked, but there were no words — just a photo of a brown cardboard box with my name on the front. I had a package awaiting me at my friends’ office.

A couple of hours later, after dropping Margot, my dinghy, back into the water, I rowed in and walked the few busy West Palm Beach blocks to a tall, white office building. In shorts and a t-shirt, with my flip-flops flip-flopping and a red bandana tied around my crazy hair, I made my way across the mirror-clean tile floor of  the building’s main foyer and sprung up the stairs to the second floor, two at a time as always. I poked my head in the office door where my friend Chris sat hard at work on his computer. He motioned me in. “Just picking up a package,” I said somewhat nonchalantly, such that if he were deeply focused he could wave and I would be gone.

He stood, though, and we chatted for a few minutes about those things that cruisers chat about: pretty new boats in the anchorage, drama on the docks with boats that have been sold and re-sold and never seem to shake the tragedy of their own energy, comings, goings, and pleasantries. I knew that my friend was busy, so a few minutes in I stuffed the delivery box into my backpack and offered my farewell.

“Someday,” I said to Chris, “when one of us writes this book, we need to make absolutely sure that we tell the story of me having my dead friend’s ashes mailed to your office. This kind of thing just can’t be left out.”

Chris laughed — a tad uncomfortably at first, but then again, louder, deeper, with the discomfort far gone like a passing fog. “We do,” he said. “We really do, because the more I think about it the more awesome it is.”

The package was from Ave del Mar’s previous owner Marjorie Bryson, the wife half of the husband-and-wife team of Jamie and Marje Bryson, and indeed it contained a portion of Jamie’s ashes. He had died in early August of 2016 after a years-long battle with Parkinson’s disease that left him in constantly-declining health but with a spirit that remained as big as the Alaskan skies he used to fly in his small plane. His ashes had been divided into thirds, with one lot sent to rejoin him with his Alaskan home, one lot sent to rejoin him with his first wife (who had died many years ago when a plane they were flying went down into the Gulf of Alaska), and a third lot sent to my care, so that Jamie could have one last voyage aboard his beloved sailboat Ave del Mar, this time with me at the helm.

I think Jamie would be proud of me at the helm, even if he might scoff at a few of my “improvements” to “his” boat. I think he would rib me about my obsession with LED light fixtures and feign disgust that the top stripe on the hull has been changed from blue to marine green. He would grumble about his cassette tape collection being discarded or that I store food in bins on what was a paperback bookshelf for him. But he wouldn’t actually care, and I wouldn’t bother to defend myself to him anyway. We would stand there, face to face, old regime and new regime in a courtship of mutual respect.

Jamie sailed Ave a lot. I’ve told those stories many times over. Together they circumnavigated the world with Marje and their son Stewart over five years, passing through both the Suez and Panama Canals. Years later, thirsty for more, Jamie set out singlehanded, conquering the gold standard of sailing: the rounding of Cape Horn on South America’s southern tip. Jamie and Ave del Mar both have pedigree. They have chops. I have dreams. I can’t even see chops from where I sit.

But Jamie was a fan. We stayed in regular touch over the years, Marje handing the phone off to him when I called and Jamie’s voice sparkling to life through the speaker. There were a few busy stretches when we may have missed a week or two, but in general it stayed consistent right to the end. Marje and I offered faint debate as to who among us benefitted more from the calls. We never did settle that. I still think it was me. She thought it was her, because Jamie always perked up dramatically when I called. Whether or not Jamie thought it was him we will never know.

In the beginning the calls were of mysteries unfolding on the boat, advice about systems or hardware, or requesting Ave’s former-captain’s input on pending decisions. As time wore on the tenor of the calls changed, as Jamie grew more confident that I was the right person for Ave and as I grew more confident in my own decisions and my own voice. One warm early-winter day on the Chesapeake Bay, as Ave del Mar and I were underway southbound, we had a particularly good phone call. Jamie’s praise was heaped deeply and sincerely onto the decisions I had been making while sailing along. “Skipper,” he said to me at the end of that call, his voice calm and lighthearted, “you’re like a son now. I am going to call you ‘Adopted Son No.3.’ You know what that means, don’t you?”

These sorts of questions were usually straight-man setup lines. You weren’t really supposed to guess. “Tell me,” I offered.

“It means you can’t fuck up, because you have me as family to answer to.”

We never met face to face, Jamie and I, but I cried long and hard and deep when I got that phone call back in August letting me know that the end was upon him. I have painted his boat and fixed her engine. I’ve re-rigged her and re-wired her and sailed her from Annapolis to Florida and again within Florida as much as I could. She is as ready as I can get her and I am as ready as I can be. Soon Jamie and I will finally sail together — him for the last time as I take him to sea, and me for what I hope is the first of many crossings. I can see him scowling at changes made to his beloved Ave, but I can see that sparkle in his eyes, too, and the hint of a smile on his lips.

He really is ok with it all, in the end. 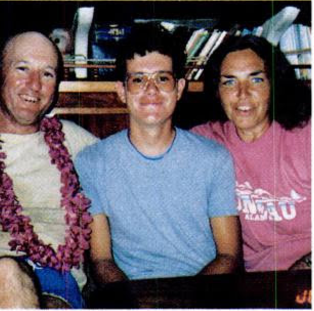 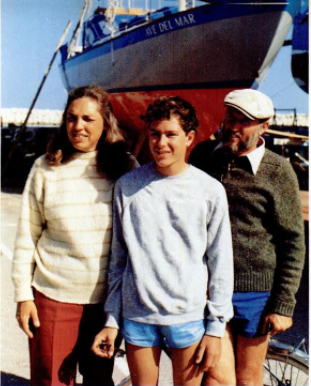 8 thoughts on “Sailing with Jamie”