“Be careful,” a wise friend once said, “when you make that decision to jump into the lifeboat. Remember that all your baggage comes with you.”

He was speaking metaphorically to marriage, not sailing, but it holds true through all walks of life. As it was phrased in the arguably-brilliant movie Magnolia, “We may be through with the past, but the past ain’t through with us.”

To that end I will apologize to anyone who by error of ignorance or simple inattention has concluded that I am on a trek of paradisical scope. Oh, there are moments, don’t get me wrong. The weather is spectacular. Million dollar sunrises and sunsets color my world on a daily basis. No commutes, no bosses, no car payments—it’s tough to garner sympathy in my world. But the challenges that confront the human animal exist here as they do in any walk of life, and I am here to tell you that while you thought I was choosing between which tropical cocktail to order and which powdery-white beach to visit, I was in fact slaying the dragons of my life.

I had two main objectives in Nassau: (1) to clear customs and immigration, and (2) to get a Bahamas SIM card for my iPhone so that I could be in touch with friends and family without needing to seek out wifi—and while a .500 average would earn me billions in the major leagues it tasted bitterly of defeat here in the Bahamas. I stood hour after hour in the local BaTelCo office, using their crackly landline to run the gauntlet of AT&T customer service. It seems my unlocked iPhone wasn’t in fact unlocked but AT&T couldn’t seem to figure out what to do about that. I was promised an email with an unlock code and instructions, for which I waited three days, rowing back to shore in my dinghy, scaling the scaffolding-like dinghy dock to buy a ginger beer I didn’t really want so I could sit in the gas station and use the wifi to check my email. Finally it arrived. Your phone is not locked, it informed me. Simply install the new SIM card and repower the phone, following the activation instructions.

So I returned to the BaTelCo office, where we switched SIM cards and repowered my phone only to get the same error message as before. Borrow their landline again. Call AT&T again.  Everyone thinks I’m sipping ice cold beer on a sandy beach when in reality I am trying to stay calm on the phone with a man whose fault my problems are not. I actually uttered the following sentence to this man: I should be sailing, but instead I am locked in some perverse AT&T prison from which no one seems to want to free me. I’m still not sure if that was a high point or a low point, but I got quite the look of approval from the BaTelCo rep for my choice of words.

Finally help poked its head over the horizon like a sunrise. “I have identified the problem,” Marcos the AT&T CSA finally told me, . “Tech support processed this wrong, your phone is locked. I will re-issue the unlock order and flag it to be rushed. You can expect an email within 24-48 hours.”

Odd, their definition of rush.

The next day the email arrived. Your phone is not locked, it informed me. Simply install the new SIM card and repower the phone, following the activation instructions.

At wit’s end, I left Nassau to head to the  Exumas, away from high-rise buildings and cellphone stores and water taxis, leaving friends and family with a phone number they think will work but won’t, a tinge of guilt in my soul but not enough to make me stay. My $50 was clearly down the drain. Cést la vie.

Ave and I motorsailed from Nassau to Highborne Cay, my planned first stop in the Exumas, less a destination than a rest stop along the path to little uninhabited islands where perhaps I can spend a day doing what it is you think I do all day. As I rounded out of my bearing and in towards my anchorage I happened to glance down at the tiller, where I noticed two small but very dangerous fissures in the stainless cuff that attaches the tiller to the rudder shaft. This was a time bomb of the highest caliber, something that won’t break under light load but will wait until I am fighting big seas where it will split like kindling and I’ll become a sailing statistic. No thank you.

There are no welders in Highborne Cay, just big mega yachts with tenders that cost many times what my actual boat cost me, flitting about like bees alighting on a flower and buzzing off again. George Town would have welders but, although it was on my course it was days away and seemed a bad decision; this was something that demanded immediate care, and that meant turning back to Nassau to find a welder. I resolved to depart the next morning, immediately after changing my engine oil. All this motorsailing had pushed my engine hours up, and we do not tempt fate with critical systems; engine oil is changed every 100 engine hours, slightly less if feasible, and is never put off. Luckily it is a routine undertaking, one I had performed many times, and I carry plenty of oil and filters with me.

After a rather uncomfortable night where the flitting speedboats, mega-yacht tenders, and sportfish boats repeated buzzed past me, tossing me to and fro in their wakes, I awoke, had coffee and breakfast, and got to work on the oil change. Run the engine. Drain the oil. Add a quarter sump. Crank the engine a few times to distribute it. Drain again. Change the filter. Add 5.4 quarts of new Rotela T 15w-40. Run the engine. Check everything. Bam. But today, with my spirits already somewhat on the ropes, the new oil filter didn’t seat properly and my 5.4 quarts of Rotela T poured out of the block and into the bilge. Note to self: those red oil filters seem not to be compatible with your Universal M35b after all. Toss the rest of them out.

Stuck in an anchorage I hated, dodging the very essence of excess that I am eager to get away from, failing miserably at work that I don’t want to do anyway so that I can return to another anchorage I don’t really want to be in so I can spend money I don’t really have didn’t really add up to that Mai-Tai-in-paradise feeling. To boot I had a bilge full of motor oil, daylight was wasting away, and the tide was ebbing. I settled in, focused but decidedly not chipper. I suctioned what I could out of the bilge, soaked the rest up with my year’s supply of oil absorbent pads (add those to the “to buy” list (again)), all the while knowing that the process was cumbersome and wasteful and that the time spent on it would render both a return sail and a re-anchoring in the falling tide untenable. So the prize that awaited me at the end of my work was another miserable night getting knocked around like Sancho Panza getting blanket tossed outside the inn. At this precise moment in time the line between “cruising” and “hazing” seemed blurred at best.

The next morning, unrested and edgy, I weighed anchor to again motorsail into the winds and return to Nassau. The violent bucking of the boat over the past day or two had sheered the clevis pin out of the block that holds my snub line off of the chain bobstay, an easy fix but another issue to deal with. I pulled the now-dangling snub line aboard only to watch the bronze hook that holds the block in place tumble into the waters of my anchorage. I was ready to leave. The engine, fat and happy from its two oil changes, was warming up, the cockpit staged and ready. I stared over the bow, wondering how much I cared about this bronze hook. Winds were supposed to pick up in the afternoon—was the “responsible” thing to do diving to retrieve it? Or kissing it goodbye, declaring it a tax paid to the “‘No!’ Day” gods so I could get on my way and sail with a cracked tiller cuff into building winds? Every option sucked. Chances are that at that moment I would have sold you the boat and everything in it for a simple coach ticket out of paradise, had you offered.

These are the moments when you remember that your baggage is there with you. You remember that struggle and challenge are a part of the human narrative. You’ve bought a ticket to a ride with higher highs but deeper lows, afloat but adrift in Walden Pond, you know and appreciate that it is real but you maybe-not-so-secretly wish that you still had someone’s shoulder to cry on or that maybe right now you were drinking a Mai Tai even though you don’t really like them. And you trudge. You push forward, knowing that meeting real challenges pays real dividends that are elusive to those who simply tread the treadmill through life. This is the “real” that you sought.

So I killed the engine, shut systems down, fetched my mask, snorkel, and fins, and dove to look for the bronze hook. It seemed the right thing to do. There were some huge fish—are those barracudas??— down there that I was convinced would want me for breakfast when I dove to their depths, but if that was to be my end so be it; I would die fighting for the last bronze hook that I owned, fighting for a toe-hold of control in my life that seemed desperately short of control at the moment. Fighting to win just one little battle. The hook revealed itself in about 16 feet of crystal clear water not far off of Ave’s bow. I stared off the man-eating fish, filled my lungs with air, and dove like a merman, fins fluttering above me as I sank like a stone to the depths. I grabbed the hook without ado, never did have to punch the fish in the face in a glorious moment of self defense, turned upwards again where the surface appeared to be about 100 yards above me, composed myself and fluttered again, upwards this time, breaking the surface with the hook in my hand and a sizable grin on my face.

Maybe, just maybe, my trudging was paying off. I was nearing the mythical, emotional, metaphorical “other shore,” surviving the sharpest stones that cut at my feet and the roaring rapids that had threatened to wash me away as I steadily placed foot in front of foot, unsteady, unsure. That bronze hook was my ticket, my proof that I could ride the ride. I tucked it into my trinkets box, toweled off, and restarted Ave’s engine for the trip back to Nassau. The engine ran, the oil stayed where it should, and Nassau slowly crept into view through the course of the otherwise uneventful day.

I suppose that paradise could be a lot worse than this. 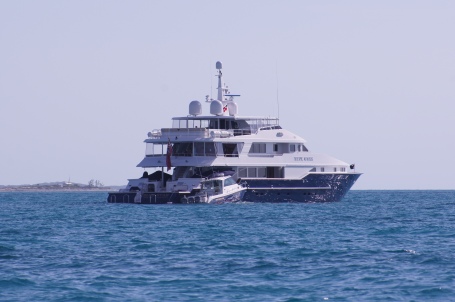 My neighbors at Highborne Cay

Those cracks are trouble

Back To Nassau Sunsets

12 thoughts on “Paradise Smells of Failure”